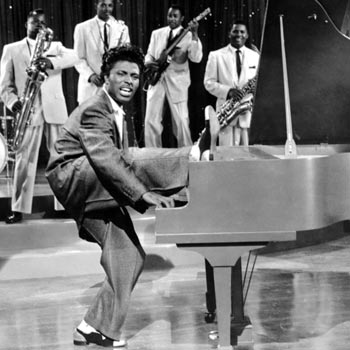 Richard Wayne Penniman (December 5, 1932 – May 9, 2020), better known as Little Richard, was an American singer, songwriter and pianist who proclaimed himself as "the architect of Rock & Roll". One of the few artists active in The '50s whose mass popularity approached that of Elvis Presley, Little Richard remains one of the most important figures in the history of rock music, and few would dispute him the title. David Bowie once famously said that the first time he listened to the man's music, he "heard God."

Born to a gospel-singing family, Richard Penniman learned to play saxophone in school, and began his career in music in his teens, when he became an impromptu opening act for the visiting gospel star Sister Rosetta Tharpe when she performed in the theatre where he was a part-time concessions salesman. He did some time on the Chitlin' Circuit, first as a female impersonator ("Princess Lavorne") and then as a member of a jump blues group called the Tempo Toppers, learned to play boogie-woogie piano from the flamboyant rock and roller Esquerita and recorded a few minor singles for small independent labels that had some regional success, but ultimately went nowhere.

Richard was working as a dishwasher in a bus station when he was discovered by Art Rupe, owner of Specialty Records, who teamed him with songwriters like John Marascalco and record producer Bumps Blackwell in the hopes of creating a viable rival to Ray Charles. Richard recorded a string of hits, including "Tutti Frutti", "Good Golly Miss Molly" and "Long Tall Sally" and starred in rock and roll films around the same time teenagers were recognised as a whole new demographic. His performances were famously wild and frenetic, his personality flamboyant to an extreme, and his playing style, incorporating boogie-woogie influences, Funk rhythms and raw, energetic vocals, made Richard a huge hit with his audiences.

Things changed in 1957, when Richard, at the height of his success, announced that he was quitting rock and roll, and subsequently entered a seminary to become a priest. The precise reason for his decision isn't entirely clear, but the most common story is that Richard experienced a prophetic dream about the end of the world, just before learning about the launch of the Soviet satellite Sputnik, compounded by a vision of angels supporting the wings of his plane to Australia when he thought it was crashing. He didn't quit music altogether though, and went back to his gospel roots for several albums.

Throughout the 1960s and 1970s, he mounted several comeback attempts on a variety of labels, including Vee-Jay (with whom he had the hit "I Don't Know What You Got (But It's Got Me)", where Esquerita also recorded, featuring the guitar playing of an obscure young session musician called Jimi Hendrix), Modern, Okeh and Reprise, though many of his efforts were just re-recordings of his Specialty hits. While performing in Hamburg, Germany, The Beatles were his opening act.

Eventually, after oscillating between his roles as a reverend and a rocker for nearly 20 years, he reconciled himself to rock and roll in the late 1980s, declaring that it could be used for good as well as evil. Younger audiences might best know him for performing the theme song to the 1994 animated adaptation of The Magic School Bus.

His song Tutti Frutti was inducted in the National Recording Registry in 2010.

following a battle with bone cancer. He will be dearly missed.

Ready, Teddy, for these tropes?: