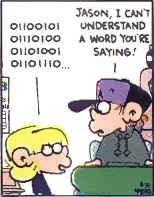 Binary code: The base-2 number system. Occasionally known as the "language" of computers. However, it's not usually spoken. But when it is, it's this trope. It's usually used jokingly as robots "native" language.

However, "binary" is not a language: Raw binary data has no meaning without a structure describing what it is. The "binary language" could be anything from "English text encoded in ASCII" to "Ideas, each attributed to a 16-bit number".

Compare Speaks in Shout-Outs, where a character speaks almost exclusively in reference to other works.