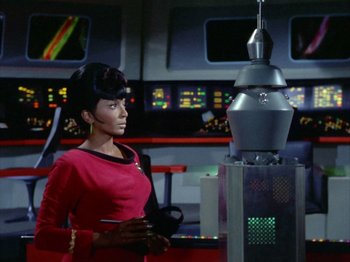 Hey, that doesn't look like one of the Founders.
Advertisement:

The episode starts off as most episodes start off: with the Enterprise on its way to a planet for Kirk to screw around with. Only, this time … there's no planet. The entire system they were assigned to go to has been wiped out of all organic life forms, leading the crew to wonder just what the hell is going on. The answer comes in the form of a tiny pod firing massive amounts of photon fire at the ship, resulting in a weak retaliation and the most ludicrous exchanges known to mankind:

Spock: We just got attacked with a blast equivalent to 90 photon torpedoes. Ship's shields down by 20%.
Kirk: Fire photon torpedoes.
(torpedoes are launched, they do nothing)
Spock: No effect, the probe that fired the blast absorbed the torpedo.
Kirk: [incredulous] How can that be? Nothing can withstand a photon torpedo blast.
Advertisement:

Um … yeah.note Maybe they just assumed it was a spaceborne Glass Cannon?

Anyway, Kirk orders a hail to the probe, which inexplicably stops its attacks. After some exchanges of Translator Microbes, the probe, called "Nomad", ceases hostilities, referring to Kirk as "The Creator" in the process. It's brought aboard, against the concerns of Scotty, and is let loose on the ship. This can't possibly go wrong, can it? I mean, it's not possibly like it's capable of or willing to Kill All Humans and — oh, wait, it's shown to have the power to annihilate an entire planet's worth of organics, and tells the crew that its mission is to "sterilize all imperfect biological organisms". Right then, moving on …

The big three converge over what exactly Nomad is and what it's doing; it seems like the probe wasn't, in fact, able or willing to cause The End of the World as We Know It, in the first place, and its creator — Jackson Roykirk — programmed it for simple deep space exploration. By its own admission, Nomad clearly had an incident with what it calls "The Other", which altered its structure and programming, causing it to become Bender's non-alcoholic and more abusive ancestor and mistaking Kirk for its builder. Unfortunately, by the time they realize this, Nomad has already been lured to the bridge by the siren's song of Uhura, which confuses it and causes it to wipe her memory when it can't discern the logic of "music". And it kills Scotty, too, when he tries to interfere, but the machine fixes him right up afterwards, so it's no big deal. Of course, with Uhura's brain now wiped, we get a hilarious re-education subplot involving her trying to read "The dog has a ball".note Unfortunately, the broadcast version of the remastered episode has severely truncated the scene where Uhura is re-learning how to read.

With time running out, and information on what happened to Nomad still scanty, Spock somehow manages to mind-meld with the thing (never mind that it's a robot), which causes two things to happen: Spock to talk like the robot McCoy keeps insisting he really is, and Nomad finding out that Kirk is a biological being and is, therefore, imperfect and a target for its eradication protocol. In an implausible bit of Techno Babble, it turns out "The Other" is a probe called "Tan-Ru", sent by an alien society to collect and sterilize soil samples as a prelude to colonization, and they combined during a self-repair attempt into the current Nomad. How that gave it the ability to nuke a world is left to the imagination, and there is no time to speculate, as Nomad has shut down the life support systems of the ship, threatening everyone on board. After confronting the killer probe and confirming that its death orders have no loophole, Kirk does what he does best: confuse a computer to death, by dropping the Logic Bomb that Nomad isn't perfect as it mistook him for its long-dead creator. This melts down two computers — Nomad itself, and Spock's brain, as Kirk was never one for flawless logic, but luckily they're able to beam the probe off the ship before it blows itself up.

The Fan Nickname for this episode is "The One with Nomad". The story for this episode was the basis for that of Star Trek: The Motion Picture, resulting in one of that film's (many) derogatory nicknames being Where Nomad Has Gone Before.