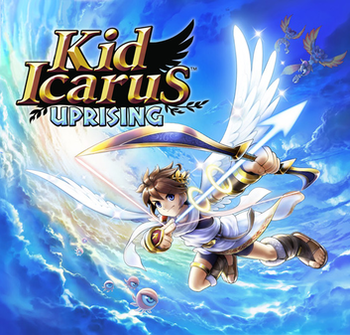 Again today, I will go soaring through the sky!
My enemies, I'll dish 'em up in a stir fry!
Gracious Goddess of Light, watches from up above!
At dinnertime, I always show the cook some love!
"Sweep the heavens, scourge the earth!"
— Quote from the blurb of Kid Icarus: Uprising
Advertisement:

Kid Icarus: Uprising is a game for the Nintendo 3DS. It was developed by Masahiro Sakurai (known for the Kirby and Super Smash Bros. series) and his Project Sora development team, and was released 21 years after the last Kid Icarus title.

Twenty-five years after her original defeat, Medusa has returned to wreak havoc on the world. Pit, now very high up in the hierarchy of Palutena's army, must battle the forces of the Underworld in order to save the entire world! But soon, the battle begins to spin wildly out of control, and it becomes obvious that the war between heaven and hell isn't going to be over as soon as everyone thinks it will be...

In addition to the singleplayer campaign, there is a mode for collected AR (Augmented Reality) cards to battle each other, and, of course, since it's by the designer of Super Smash Bros., there's a multiplayer mode. Players who preordered the game in the US got a code for a free download of a 3D-remastered version of the original Kid Icarus, and the Nintendo Video application on the 3DS featured three short Kid Icarus: Uprising anime videos called Thanatos Rising (part 1,

by Studio Shaft) (also available for download for My Nintendo users).

The game can be played with the Circle Pad Pro attachment, which can be used instead of the 3DS's built-in circle pad, for those who are left-handed.