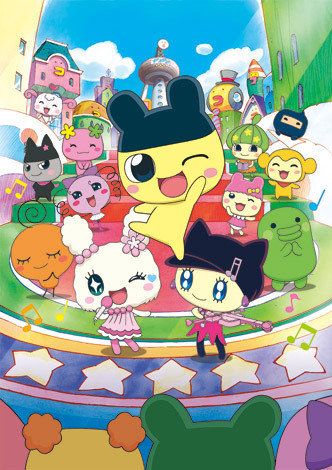 Looks like Digimon's ancestors got the anime treatment too. note Characters in front, going clockwise: Mametchi, Melodytchi, and Lovelitchi; characters to their left, going down from the top: Hapihapitchi, Flowertchi, Kuromametchi, Makiko, and Memetchi; characters on the right, going down from the top: Gozarutchi, Uwasatchi, Kikitchi, Chamametchi, and Kuchipatchi.
In 2009, Bandai's Tamagotchi virtual pet toy series got adapted into a TV anime featuring the various everyday happenings in the lives of Tamagotchi mascots Mametchi, Memetchi, Kuchipatchi, and their friends on Tamagotchi Planet. The anime proved to be such a massive hit that it ran for a total of 271 episodes over a span of four installments:
Advertisement:

There is also a fifth installment called Tamagotchi! Tamatomo Daishu GO!, but it's usually not counted as an official part of the series since it consists of 26 episodes taken from the previous four installments, just with new short segments placed in them. Shortly after it ended in 2015, the anime was replaced by Kamisama Minarai: Himitsu no Cocotama.