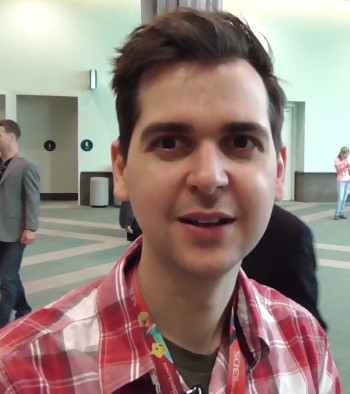 Lewis Brindley is the co-founder of the Yogscast, and known for co-op Let's Play series of numerous games, including World of Warcraft, Minecraft and competitive Garry's Mod, to which he frequently pairs up with Simon Lane. The long-suffering de facto boss of the Yogscast, Lewis also hosts the podcast The YoGPoD with Simon. Aside from the content on his own channel, he appears regularly on Sjin's channel for Sjin's Farm, as well as on Sips' channel for DirtQuest, Trouble in Terrorist Town and The Hidden.
Advertisement:

The more cautious out of him and Simon at games, but often no less silly and bizarre in his commentary.

He roleplays the "spaceman" Xephos in various Minecraft series, notably Shadow of Israphel, and acts as a kind of amoral Villain Protagonist mad scientist in Yog Labs.

His YouTube channel (shared with Simon) can be found here

. He shares a channel with Sips here

He was in a long term relationship with Hannah Rutherford (and was even living with her at one point), but in early 2015 the relationship ended (although the two are still good friends).

Not the best choice of words, Lewis.

Not the best choice of words, Lewis.