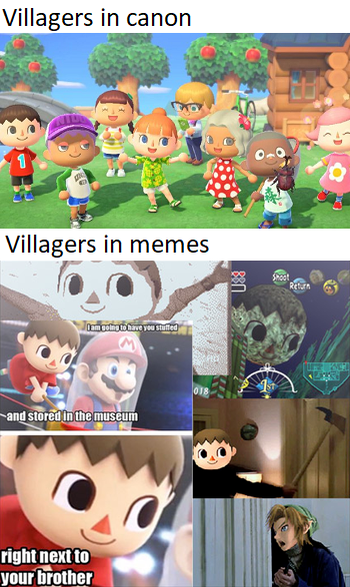 So happy to smash U!
The video: Literally a cute idol singing a cute song.
The comments: WAR CRIMES
— A Youtube commenter

Sometimes the internet hivemind will take a normally friendly character or a more mild antagonist, and depict them as an Ax-Crazy psychotic killer, usually Played for Laughs of the Black Comedy sort. This could be the result of stalker behaviour or creepy expressions, or a character's mental state exaggerated to horrible conclusions.

Subtrope of Memetic Mutation. Related to Memetic Badass. Compare and contrast with Ron the Death Eater. Both are about depictions of characters being evil, this trope is generally more silly and light-hearted, while Ron the Death Eater is much more serious and often stems from hatred of a character. Those with Clingy Jealous Girl, Cute and Psycho or Yandere tendencies are common targets. Even particularly weird Cloudcuckoolanders can end up with this reputation. Just as damaging to a character's reputation as the Memetic Molester, who is depicted as a rapist/molester figure for laughs rather than a murderous psychopath. Related to Never Live It Down in some cases. Compare with Memetic Troll who's depicted as being a troll by the internet, and the Memetic Loser, who is depicted as more pathetic.

Troll Face in the original comics was a harmless troll who play tricks on people. In todays Internet culture he is depicted as a dangerous sociopath.

Troll Face in the original comics was a harmless troll who play tricks on people. In todays Internet culture he is depicted as a dangerous sociopath.