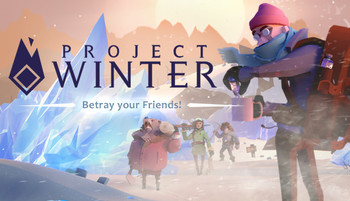 Betray your friends.
"Betray your friends in this 8 person multiplayer focused on social deception and survival. Communication and teamwork is essential to the survivors’ ultimate goal of escape. Gather resources, repair structures, and brave the wilderness together. Just beware that there are traitors within the group who will be steadily gaining strength as the match progresses. Traitors’ only goal is to stop the survivors by any means necessary."
—The website's official description
Advertisement:

Project Winter is a multiplayer game published by Other Ocean Group. It is a survival game where players must gather enough resources to survive the winter. Up to 8 players have different roles to play, and must finish tasks for maintenance. However, up to three of them are Traitors, whose objective is to impede the Survivors' progress, kill every survivor, or simply screw them over to win by putting resources in traitor boxes.

The game has a single map which generates differently in each new game with the cabin centered in the middle. Survivors are given specific tasks to fulfill to escape the snowy wilderness, but who is a Survivor or Traitor depends on the player. Dead Survivors and Traitors become Ghosts to either help or impede other players. A global event occurs every once in a while, whether a blizzard, throwing players across the map, or putting players in bunny suits.

To win, Survivors must gather every available resource and call in a rescue vehicle, and escape before time runs out. Traitors simply either off a Survivor, or take their resources and let the game's heavy blizzard kill them.

Compare with Among Us, a Werewolf-type style game and its variations based on finishing tasks and having traitors called Impostors to impede the Crewmates' progress.