Taking You with Me 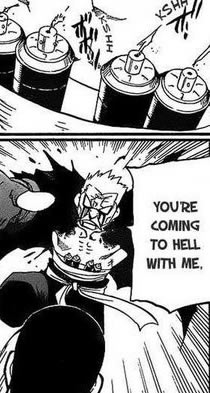 If you're going out, make it count.
"From hell's heart, I stab at thee; for hate's sake, I spit my last breath at thee."
— Captain Ahab, Moby-Dick note quoted by Khan, in similar circumstances, in Star Trek II: The Wrath of Khan.
Advertisement:

You're really in trouble now. You've been defeated, captured or otherwise humiliated by your enemies, and are now at their mercy. But you've got one last ace up your sleeve. The only problem is, this final attack is going to spell death for you as well as your enemies. But hey, you're going to die anyway! Might as well try to take some of them down with you.

Cue Earth-Shattering Kaboom via a Superpower Meltdown by using a Dangerous Forbidden Technique involving a Painful Transformation into a One-Winged Angel, or anything that suits your tastes, really. Don't forget, however, to growl in a menacing tone: "If I'm going to die, I'm Taking You With Me," or perhaps "See You in Hell."

One form of Taking You with Me is when a villain deliberately sets up a Load-Bearing Boss situation, hoping to collapse his lair on the victorious heroes (over cries of "You'll kill us both\all!"). Alternatively, the threat of taking an attacker down with you can allow you to achieve a Victory Through Intimidation. If this action is taken by a usually stoic villain, may have been preceded by a Villainous Breakdown. May also occur after crossing the Godzilla Threshold.

Not to be confused with Taking Them Home With Me. It also should not be confused with Backstab Backfire, where the death of the person trying to do a last ditch effort in killing his enemy did not plan the possibility of death when attempting to backstab them after being defeated.

open/close all folders
Card Games
Comic Books
Comic Strips
Fan Works
Red Skull: Then let me show you a bit of the world below, my friend. Or, perhaps, only tell you about it. Within this cathedral, at its lowest level, is an incendiary device.
Captain America: A fire bomb!
Red Skull: Do not worry yourself. Less time remains than you would need to reach it. No man remains alive in this structure, other than ourselves. Within seconds, no man will be alive in it at all. I have taken the opportunity to retire us both from battle, Captain. The conflict is ended. Farewell.
Film — Animated
Music
Mythology and Religion
Podcasts
Stand Up Comedy
Tabletop Games
Theatre
Theme Parks
Toys
Visual Novels
Web Animation
Webcomics
Web Original
Western Animation
Feedback

Arguably one of the most monstrous incarnations of Shredder to date, 03's Utrom Shredder was willing to destroy the Multiverse if it meant getting rid of every version of Ninja Turtles everywhere.

Arguably one of the most monstrous incarnations of Shredder to date, 03's Utrom Shredder was willing to destroy the Multiverse if it meant getting rid of every version of Ninja Turtles everywhere.