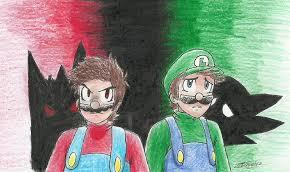 Which side are you on?
"I’ll trust you. They’ve tried to take my brother away before...but I won’t let them do it again!"
— Luigi
Advertisement:

Bad Things Will Happen is a Mario manga by poker10403, formerly available on DeviantArt.

One day, Mario disappears suddenly. A few days later, Luigi gets a call from Professor E. Gadd saying that strange ghost-like creatures have appeared and have taken Mario.

This sounds kind of like a Luigi's Mansion plot, doesn't it?

But it's not. Because there's a twist: these new ghosts are Pokémon.

Now Luigi, joined by a Haunter named Soul, sets on a mission to stop the combined forces of King Boo and an evil Gengar, as well as save Mario, who has been brainwashed by said Gengar.

There are currently six chapters completed, comprising over 100 pages, but the comic has been dead for a few years, and the author’s account has since been deactivated. However, the comic can still be read here

, with an (edited for grammatical fixes) transcript available here

This Fan Webcomic provides examples of: