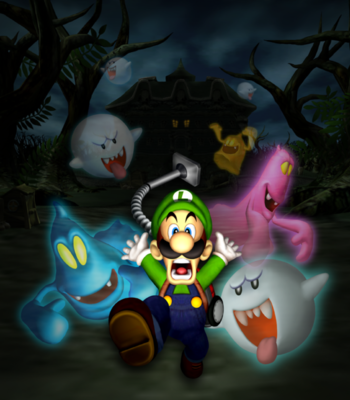 It's a picture, but I wouldn't call it art.
In most stories, the hero faces his foes without fear. This is not one of those stories.
Advertisement:

(For the series in general, see here)

Luigi's Mansion is the first game in the Luigi's Mansion video game series. The first title was a 2001 video game produced by Nintendo and released as a launch title for the Nintendo GameCube. Though set in the universe of Super Mario Bros., the game is unusual in that it is not a platformer, but a third-person adventure game (it could even be considered a sort of Mario-themed comic parody of the Survival Horror genre, right down to a spoof of the Resident Evil loading animation) and in that the character of Mario plays the role of brother in distress and is not a player character at all, appearing only briefly around the middle and at the end of the game.

The plot follows Mario's brother, Luigi, who won a mansion in a dark, spooky forest from a mail-in contest he didn't even enter. Attempting to find fortune in this unexpected turn of events, Luigi decides to brave the forest to visit his new mansion, inviting his brother Mario to meet him there. Once he finds it, however, he gets burdened with some grim news: The mansion is not only infested with evil ghosts, but their leader has trapped Mario inside a painting.

With the help of a kindly old ghost-buster/Mad Scientist named Professor Elvin Gadd, Luigi straps on his trusty Poltergust 3000, a vacuum cleaner that can trap ghosts as well as money, items, and some minor props, and sets forth to rid the mansion of its ghastly inhabitants and rescue his brother from the spooky mansion.

Basically, the aim of the game is to capture all ghosts in the mansion while finding as much cash as possible, which is littered around the mansion in the form of gold coins, bills, gold bars and jewels. At the end of the game, the amount of money you were able to obtain is tallied up, and Luigi uses it to buy a house in accord to how much he has, from a truly regal estate if you did really well to a decrepit little shack if you really suck at the game or a tent if you go out of your way to avoid gathering money.

Despite not having had a sequel for many years, the game was represented in other games such as Mario Kart, Super Smash Bros., or Nintendo Land, showing that Nintendo hadn't forgotten the game. Eventually, in 2013, a sequel finally arrived via the Nintendo 3DS: Luigi's Mansion: Dark Moon (simply Luigi's Mansion 2 outside of North America). It would then be followed by a remake in 2018 for the same console and a second sequel in 2019 for the Nintendo Switch. The sequels were developed by Next Level Games, while the remake was handled by Grezzo.