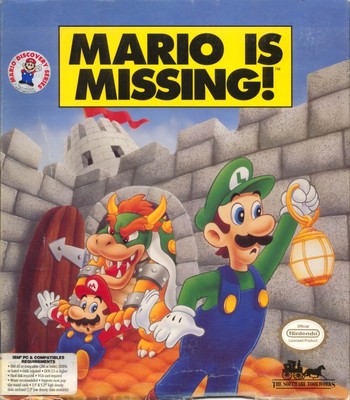 He's not missing, he's right behind you, Weegee!
"You won't find adobe here in Nairobi..."

Mario Is Missing! is a geography-based educational game developed by The Software Toolworks and released for the PC in 1992 and Nintendo consoles in 1993. The game is the result of Nintendo partering with Radical Entertainment to create an educational Mario game. Nintendo licensed the Mario characters but was otherwise not involved in the game's development. While Mario still stars in the title, this was the first game with Luigi as the main character, and remained the only one until Luigi's Mansion came out in 2001. The PC version is notable for giving birth to the "Weegee" internet meme, based on Luigi's creepy sprite.

The premise is that Bowser plans to flood Earth, and he sends Koopas to steal famous landmarks to help fund his operation. Mario, Luigi, and Yoshi travel to Bowser's castle to stop him. Mario enters all by himself and gets captured, prompting Luigi to go and rescue him.

Luigi progresses in the game by completing levels in Bowser's castle; each floor is guarded by one Koopaling whom you must defeat and contains a number of pipes which transport Luigi to a city containing Koopas. Once in the city, Luigi must collect the stolen artifacts. He must then find and reopen the landmarks by correctly answering three questions about them.

A sequel, Mario's Time Machine, eventually came, which is pretty similar, but WITH TIME TRAVEL!

"...but they do have some spectacular hotels!"