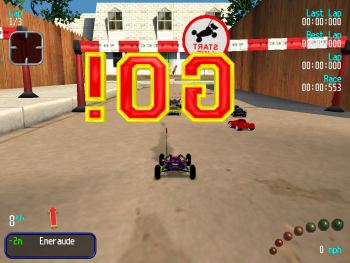 !ƨɘniϱnɘ ɿυoγ ɈɿɒɈƧ
Solid Santa: Major, I've delivered the presents, mission accomplished.
Major Tim: Good, now get out of there.
Solid Santa: Are you kidding me?! Now I have to do it BACKWARDS?
Major Tim: Yes, I have to artificially extend playtime somehow.
— Merry Gear Solid
Advertisement:

With the cost of development for video games going up, it's understandable that the dev team would want to find a way to cut corners. As such, a lot of game content becomes recycled. It's easier to miss and/or explain with small things, but with something as large as a whole game environment, players might start to catch on.

Some decide to cut corners elsewhere. Others try to hide the recycled geometry better.

The two major ways that developers try to hide re-used level geometry are:

Note that these two methods are not mutually exclusive, and indeed several games have utilized both methods, sometimes simultaneously.

There are several reasons why the development team might re-use the level geometry in this manner:

In addition to the flipped geometry small alterations can be made to the level itself, either to accommodate extra features not present in the original level, or to justify the re-use of the level geometry by showing how the level has changed in comparison to the last time it was used, such as damage or new background objects left behind by people/creatures that have occupied the area since you were last there.

Compare Backtracking, where the level is exactly the same as before, only you're going through it in the opposite direction.