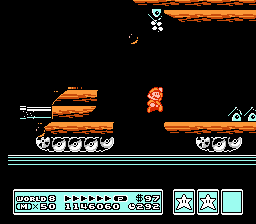 "There's a stage where the screen keeps scrolling up. If you're caught at the bottom, you die. In Trevor Belmont's world, what killed him? The T.V. Screen?"
— The Angry Video Game Nerd on Castlevania III: Dracula's Curse
Advertisement:

A level in a Platform Game where the screen scrolls at a constant rate (like in rail shooters), no matter where the player runs or jumps to. This doesn't make any sense at all, but since you didn't care when you were 12, why start now?

Generally, the gameplay in these levels shifts from exploration towards a more "survivalist" task of avoiding a combination of fixed and moving obstacles. The player must choose between moving forward early, at the risk of running afoul of some not-yet-seen obstacles, or waiting to move later, where he runs the risk of being forced to move by the level's scrolling at a moment when the obstacles are more dangerous.

Often you will be mortally crushed if you get caught between the advancing side of the screen and a stationary wall, making the screen boundary a kind of Advancing Wall of Doom. Only occasionally are these kinds of levels coupled with an actual Advancing Wall Of Doom, providing some justification for the enforced scrolling. Some of the time it is stated or implied in the story that there is an offscreen Advancing Wall Of Doom. It might also just mean that there is a limited amount of time for the character to reach his destination and running short of that is tantamount to failing. In vertical-scrolling levels, there will be an ever-rising bottomless pit, and solid platforms that fall below the edge of the screen will be consumed by an unknown force.

These levels can be a bit aggravating to play, particularly when combined with any number of Classic Video Game "Screw You"s.

Often times, you can't simply fast-forward the scrolling by advancing in the direction of it, forcing you to deal with whatever speed the screen is moving at. As such, Auto-Scrolling Levels are the bane of many speedrunners and impatient players.

When the entire game is one of these, it's an Endless Running Game. Whether Minecart Madness is a subtrope is debatable; similar to endless runners, these levels force the character to move a fixed speed, challenging the player to jump, duck, and/or attack at the right times. If this occurs during a boss battle, you may be fighting an Advancing Boss of Doom or a "Get Back Here!" Boss.

Cranky Kong: "A bit aggravating," they call these auto-scrolling levels? Back in my day, we didn't have any scrolling whatsoever — just one static screen, maybe a different static screen for different levels! And we liked it, by gum!