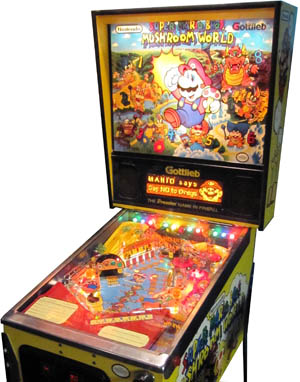 Super Mario Bros. Mushroom World is a Physical Pinball Table based on the popular video game franchise, designed by Ray Tanzer and released by Gottlieb in 1992. Unlike Gottlieb's earlier Super Mario Bros. pinball, Mushroom World is expressly designed for younger players. The playfield cabinet is not as long as a conventional pinball machine, and the game could be equipped with shorter legs to lower its height. Operators could set the game to one of two difficulty modes, and it could be configured to reward redemption tickets.

The game itself is a simplified version of Super Mario Bros. 3. Mario must travel through seven lands of Mushroom World and clear each one. Doing so opens up the eighth world, Dark Land, with lots of opportunities for players to score points (or tickets). Powerups provide Mario with fire, frog, and raccoon powers, while the Warp Whistle opens a ramp for hidden secrets.

Of particular interest to pinball fans is the game's playfield, as the smaller cabinet and kid-friendly appeal resulted in some very unorthodox designs. There are no outlanes to drain the ball, sinkholes return the ball above the flippers, and the drop targets will automatically drop according to the difficulty of each world.

Fewer than 500 of this pinball were made, making it a rarity for Mario collectors.

This game and the earlier Super Mario Bros. both marked Charles Martinet's first performance as Mario. According to Martinet, Gottlieb and Nintendo used his voice clips without paying him and he remained uncredited as a result.