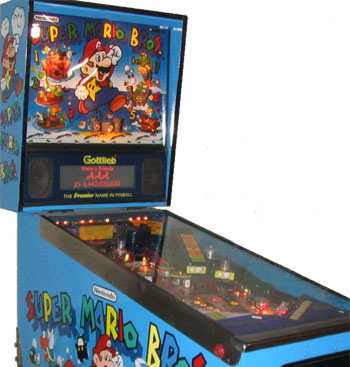 A Mario game by... Gottlieb?
Advertisement:

Super Mario Bros. is a Physical Pinball Table based on the popular video game franchise. It was designed by Jon Norris and released by Gottlieb in 1992, and is the first of two Mario-themed pinballs from Gottlieb.

In spite of the name, the pinball takes most of its inspiration from Super Mario World. True to the video games, the player must help Mario become S-U-P-E-R, then shoot for and destroy seven of Bowser's castles to rescue Princess Peach. Warp pipes quickly move the ball across the playfield, while Mario can enlist help from his brother Luigi and Yoshi the dinosaur. Even better, hit three koopa shells, then grab a key and start one of six Bonus Rounds for more points.

Aside from the license, Super Mario Bros. is notable for being the first pinball game from Gottlieb to use a dot matrix display.

Super Mario Bros. Mushroom World and Super Mario Bros. both marked Charles Martinet's first performance as Mario note  according to Martinet, Gottlieb and Nintendo used his voice clips without paying him and remained uncredited as a result.

Also see Super Mario Bros. Mushroom World. For the never-released pinball based on The Legend of Zelda, see Gladiators.