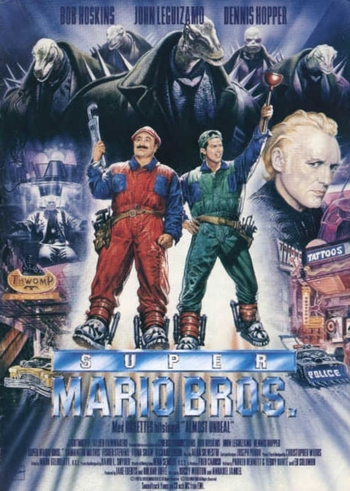 It's Mario and Luigi as they will never be seen again.
This Ain't No Game, It's A Live Action Thrill Ride!
Advertisement:

In 1993, Lightmotive made a Live-Action Adaptation out of Super Mario Bros., which was later bought by Disney (or, more specifically, its banner Hollywood Pictures) under Jeffrey Katzenberg's (later of Dreamworks) direction. That's right, an attempt was actually made to make a coherent narrative out of plumbers, killer turtles, and mushrooms — and it did so by reimagining the franchise in a cyberpunk fashion.

Mario Mario (Bob Hoskins) and his younger brother Luigi Mario (John Leguizamo) are Italian-American plumbers trying hard to earn a living in Brooklyn. A run-in with Daisy (Samantha Mathis), a paleontology student in her 20s, has Luigi very interested and the two quickly bond. However, all their lives are turned upside-down when Daisy, as well as Mario's girlfriend Daniella (Dana Kaminski), are kidnapped and taken through a mysterious portal in Daisy's dig site after it's sabotaged by rival plumbers from the Scapelli corporation, which is looking to build there.

The portal leads to a parallel world where reptiles, instead of mammals, evolved into people and became the dominant species on the planet. The alternate world is mostly barren wastelands, except for Dinohattan, which appears as a dark and dystopian version of New York, run by the despotic President Koopa (Dennis Hopper) and his lover Lena (Fiona Shaw), and further besieged by a mysterious fungus. Attempting to rescue Daisy and Daniella, the Mario Brothers end up going on a crazy adventure through every tier of this "Mushroom Kingdom" and eventually realize it's up to them to stop Koopa from conquering Earth for its resources and turning anyone who opposes him into their evolutionary ancestors.

This film is notable for two major firsts. The big one is that it was the first ever full-length, theatrical, live-action motion picture to be based on a video game, though it is not the first feature-length theatrical production based on a video game in general; that title is a tie between the obscure 1986 Japanese animated film The Great Mission to Save Princess Peach!, which was also a Mario movie adaptation, as well as an animated Star Soldier film released the same day. The other groundbreaker is that the movie was the first to be edited with computer software, utilizing a digital intermediate and a beta version of Autodesk Flame that allowed the filmmakers to composite over 700 shots of complex effects, surpassing the capabilities of earlier optical counterparts. The results would be cited as pivotal in the film industry's transition from practical effects to CGI, alongside the similarly dinosaur-themed Jurassic Park the following month.

While it failed at the box office, the movie developed a cult following and has a dedicated fansite

that archived various versions of the movie, restored many deleted scenes and trailers, and released a Region 2 Blu-ray with many extras. In June 2021, the people behind the site pooled their resources with filmmaker Garret Gilchrist (of The Thief and the Cobbler: Recobbled Cut and early RedLetterMedia fame) to create a Fan Edit combining over 20 minutes of deleted scenes with a re-edited version of the final film. It was released through Archive.org

with creative input from one of the movie's writers was announced for the 20th anniversary. However, the comic hasn't been updated since 2015. Super Mario Bros. (1991), an early script of the film, has its own page.

Decades after the film was released, Nintendo announced a new film based on the Mario franchise. It will feature an unrelated story, however, and be an Animated Adaptation courtesy of Illumination Entertainment, and is set to be released on April 7, 2023, starring Chris Pratt as Mario, Charlie Day as Luigi, Anya Taylor-Joy as Princess Peach, Jack Black as Bowser, Keegan-Michael Key as Toad, and Seth Rogen as Donkey Kong.

The movie and comic provide examples of:

open/close all folders
The Film
The Sequel Comic
Feedback

Just as everything is resolved and their adventures are over, Daisy comes running back to Mario and Luigi for help.

Just as everything is resolved and their adventures are over, Daisy comes running back to Mario and Luigi for help.