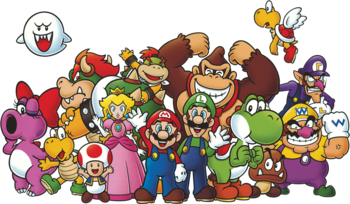 Most of the main Mario characters. And Waluigi.
Advertisement:

A list of characters and tropes associated with Nintendo's biggest franchise, Super Mario Bros., including all the numerous spin-offs and side games. For character tropes specifically relating to the 1993 film, see its page.

Appeared in the Donkey Kong Jr. segments of Saturday Supercade. He is a biker who befriended Donkey Kong Junior and joined his quest to find his father.

Bones' identical female cousin that appears in the Saturday Supercade episode Double Or Nothing, Lucy is set to inherit a mansion from her great-grandfather, but is troubled by a duo of villains. Bones and Junior try to help her.

A talking dog who traveled with the Mario Bros. in The Great Mission to Save Princess Peach!. It turned out he was Haru-ōji, a prince from a neighboring kingdom whom Bowser had turned into a dog because he owned the other brooch, signifying that he is destined to be with Peach.

"Excuse me, everybody! I just closed the peanut butter jar on my tie. Can somebody help me?"

Princess Toadstool's father mentioned in some versions of the original storyline for Super Mario Bros., but never seen in the games. He does appear in the Valiant comics as well as the Nintendo Adventure Books, where he's also called King Toadstool.

The "chief mushroom assistant" (contrasting Toad's job as the "royal mushroom retainer"), which unfortunately means he does just about everything for the king rather than the princess.

A pink talking fish wearing a gaudy bow tie who shows up in a few of the Valiant Mario comics. Resented in-universe for generally being a huge pain in the tail for everyone he decides to address.

Appeared in the Game Boy comics. A petty thief who behaves as a secondary antagonist and pawn agent for Tatanga, who hypnotizes him to do his bidding.

A blond caveboy who appeared in the Super Mario World cartoon.

Appeared in the Super Mario Adventures comic. A travelling salesman with a friendly and jovial demeanor who runs into our heroes on a few occasions selling various objects. Where he gets them from, how he gets around so quickly, and how useful his stuff is rather questionable.