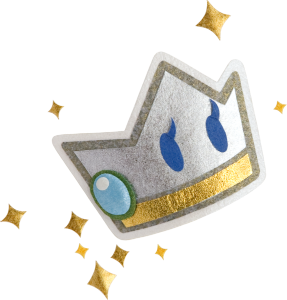 A Sticker fairy who is the caretaker of the Royal Stickers. 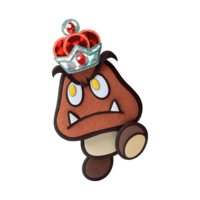 Well, more like 16 Goombas, with one of them being the boss and having his mind warped by the Royal Sticker.

"I was disappearing...From ice to fog...Returning to the sky...I just wanted a body that wouldn't melt..."

A Mr. Blizzard who wished for a body that would never melt. When the Royal Sticker landed on him, he got his wish... at the expense of his sanity.

Sling-a-Thing Toad
The owner of the "Sling-a-Thing" operation.
Travelling Toad
A recurring Toad who seems to travel the world and gets beaten up by goons in every region he's traveled to.
Sticker Museum Curator
A Toad who is in charge of a museum dedicated for information regarding all kinds of stickers.
Shady Toad
A Toad who hosts a secret black market for all Things.
Oasis Toad
A Toad who lives at Damp Oasis.
"Snifit or Whiffit" Host
The host of the game show "Snifit or Whiffit". He returns in the next installment, where he now hosts "Snifit or Whiffit: Seabed Edition".
Enigmansion Boos
100 Boos sealed in the Book of Sealing who, thanks to Kamek, are free to roam and haunt the Enigmansion. They're actually not that scary and more fun, but that doesn't stop the owner from requesting Mario to help seal the Boos back. Thanks to Kamek again, the sealed Boos now form a Big Boo, which gets defeated by Mario.
Enigmansion Steward
A Purple Toad who is the steward of the Enigmansion. He was the servant of the previous steward of the Enigmansion until he died, making him the new owner through inheritance. Once the owner suddenly comes back from the dead via photograph, he becomes his servant.
Enigmansion Forebear
A Toad who was the ski lift operator for 30 years until he and his servant moved to the Enigmansion. He died, with his servant becoming the new owner. He is revived with an old photograph of his via Paperization and becomes the owner of the Enigmansion again, with the steward being his servant again.