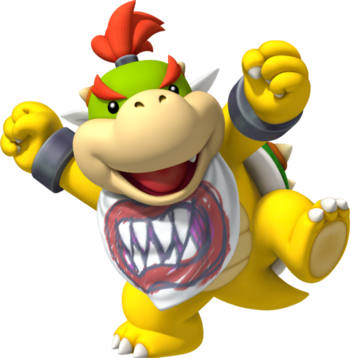 Bowser Jr. (known in Japan as Koopa Jr.; full name presumably Prince Bowser Koopa Jr.) is Bowser's son and heir to the throne. He's a rotten little schemer who wants Princess Peach to become his mommy. He first appeared in Super Mario Sunshine disguised as Mario in order to get him sent to prison, and when that failed he personally kidnapped Princess Peach himself, revealing his true form. Since then, Bowser Jr. has become his father's right hand man and most reliable soldier, having successfully kidnapped Princess Peach more times than anyone except Bowser himself.