Note: For the characters that first appeared in Superstar Saga, click here.

The Four main characters on the left, along with Lakitu and some other minions.
The four main protagonists of the story, typical "minions" that have risen up as the de facto leaders of the Koopa Troop while Bowser is missing.
Captain Goomba

An average Goomba who gains the starring role in Minion Quest when his fellow minions pressure him into accepting the role of captain after Bowser goes missing — and becomes one of the major contributors to the events of the entire story of Superstar Saga, both Mario Bros and Minion Quest.
Captain Shy Guy 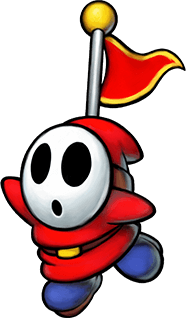 A Shy Guy met in the Beanbean Kingdom and the only captain who actually deliberately asks to be a captain. Joins Captain Goomba as a captain after realizing how clueless Captain Goomba is.
Advertisement:
Captain Boo 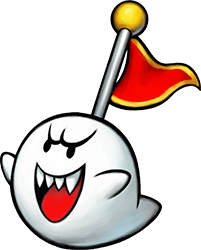 A Boo that Captain Goomba and Captain Shy Guy find in Chucklehuck Woods. Despite his protests, Captain Goomba forces him to become one of the captains.
Captain Koopa 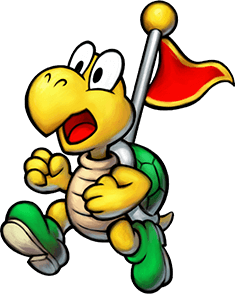 A Koopa Troopa found in Teehee Valley. He loves making puns to the dismay of everyone except Captain Goomba.

Lakitu
The Goomba Squad's "scout" that searches for any brainwashed minions that need to be reformed by them.
Hoohoo Mountain Goombas
A group of Goombas from the Koopa Cruiser who persuade the at-first unnamed Goomba into becoming their captain. They are first seen at the second level of Hoohoo Mountain.
Advertisement: