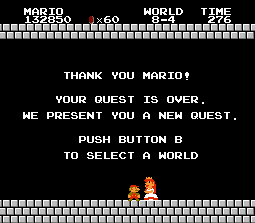 It took him eight castles to go through, but he finally managed to rescue her for the first of many times...
Advertisement:
open/close all folders