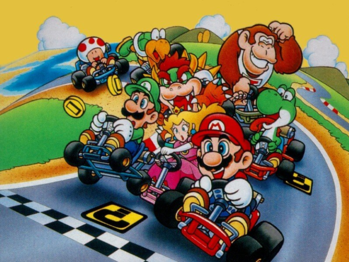 Think that the big red plumber has done everything he has the opportunity to do? Try putting four wheels, an engine, and an incomprehensible amount of cement on him.
Super Mario Kart (1992) is a Racing Game for the Super NES that started the Mario Kart series and, with it, a whole slew of Mascot Racer imitators.
Advertisement:

Due to technological limits, older driving games felt little like racing on a track and more like watching the track twist below you as other racers materialized or vanished at whim. In 1990, F-Zero changed everything with the Super NES's Mode 7 hardware, finally creating a realistic system with a (technically fakenote The aforementioned Mode 7 hardware could scale and rotate backgrounds, resulting in a 3D-like effect.) 3D track and real racers.

Super Mario Kart utilized Mode 7 to make a fast, wacky, and thrilling challenge. Your racer must navigate the track—shown in the bottom split-screen—rife with obstacles such as grass, pipes, oil slicks, fish, and many an outright Bottomless Pit. And the other racers will pose a threat on their own. Yes, both you and your opponents may pick up items to throw in each others' path; this is one of the many kart racing tropes Super Mario Kart started.