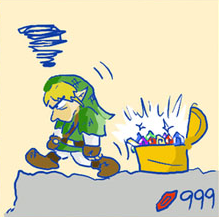 At least the Rupees max out at four digits these days.
Advertisement:

The maximum quantity of something that a game allows. Once you've hit the cap for that particular element, any other factors which would exceed that limit are silently ignored, and may as well not have happened at all.

This has a variety of uses in game design, but the gamer is concerned with caps in only a handful of instances:

There are three kinds of caps:

Games are sometimes not even programmed to cap such counters when they should. They will dutifully add one to a value that can't properly go any higher, resulting in a kind of malfunction known as an Integer Overflow

. This is especially common with old games, because putting in a test for a maximum value would use memory and CPU cycles they didn't have to spare. An overflow might manifest as:

In gaming, 'cap' as a verb can also be short for 'capture'. But that's not important right now.