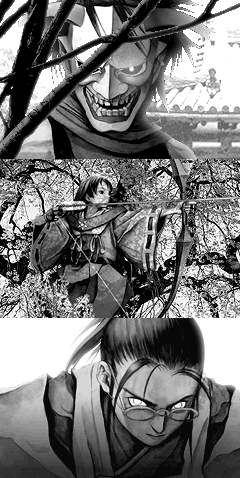 Guwange is a Bullet Hell Shoot 'Em Up, made by Cave in 1999, with artwork by "Joker" Junya Inoue. It is the Muromachi Period in Japan, a time of great strife, chaos, and violence. Plagues are befalling the land, people are getting possessed by shikigami and dying after a year, and a malevolent power named Guwange-sama rules from Mount Gokumon. Three protagonists decide to attack Guwange, each having their own motives for doing so:

Similar to Gunsmoke a decade prior, the player characters are humans walking on foot, and the stages scroll in many different directions as opposed to just straight-up or straight-right.

It is available in English on the X-Box Store (On X360 and BC on X1). This version has an XBOX Arrange Mode which allows independent movement of the character and shikigami, and some gameplay changes to make high-scoring more interesting.