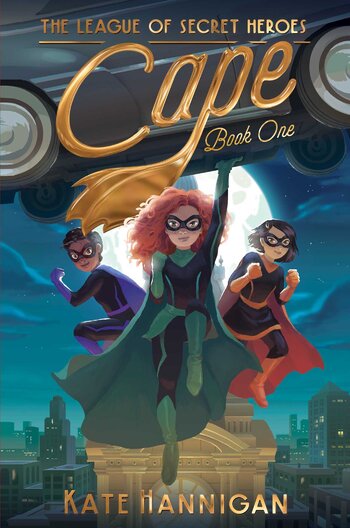 Cape is a Children-to-Middle Schoolers Superhero novel by Kate Hannigan. It is the first book in her trilogy, The League of Secret Heroes.

Josie O'Malley is an Irish girl living in Philidelphia during World War II, and working at a diner to help her family afford to live in their apartment. Her two favourite things are cipher puzzles (at which she's a total whiz), and Superheroes, particularly Zenobia, her personal favourite. However, the superheroes of the world haven't been all that active lately, Zenobia included. It's been like that so long, in fact, that people are actually beginning to believe they never existed.

Josie's father is away fighting in the war effort, and Josie wants to help out any way that she can as well. She decided to take a puzzler test to enlist as a puzzle coder.

After said test is through, Josie notices that the man in charge of the tests threw away all the ones the girls took, and is not pleased. She leaves with two other girls, whom she gets to know as Akiko Nakano, and Mae. They get to talking, and discover a spark seems to literally jump between them whenever their heads make contact with each other. They also learn from Mae that "Room Twelve" back at the Carson Building, where they took the test, is where they do secret government testing, and decide to return.

When they get there, they discover one of the few-remaining heroes, Stretch, in pursuit of a mysterious villain. When he touches the villain, however, all that remains of him is his costume. The three girls, deciding the spark they have must mean something, don the Stretcher's costume, and discover they can transform into superheroes with their spark.