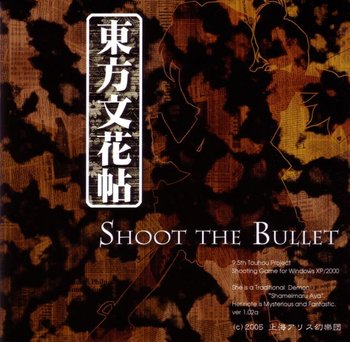 Touhou Bunkachounote "Word Flower Album" ~ Shoot the Bullet is a video game created by Team Shanghai Alice for Windows computers in 2005. It's the 9.5th videogame installment in the Touhou Project franchise, released as a tie-in to the book Touhou Bunkachou ~ Bohemian Archive in Japanese Red.

For reasons known only to herself, the tengu Aya Shamameimaru has started travelling around taking photos of people and their Spell Cards.

A twist on Touhou's traditional Bullet Hell formula, Shoot the Bullet has you rematch bosses from previous Windows games, armed with new and more difficult attacks (and in the case of Suika and the PoFV cast, traditional attacks period). But rather than fighting back, you must take their pictures. The more interesting the photo, the more points it's worth.

A Sequel titled Double Spoiler ~ Touhou Bunkachou was released in 2010.

Has no relation to the Shoot the Bullet trope.