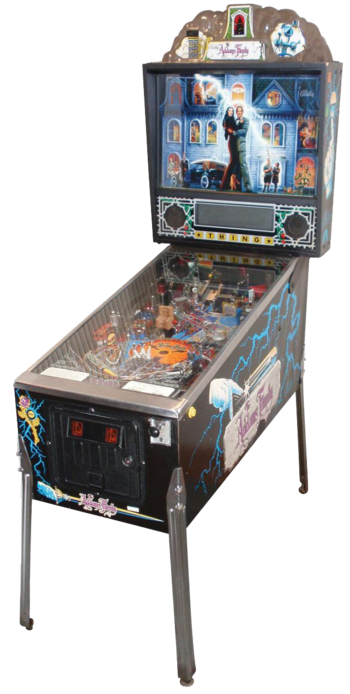 A pinball experience for the whole family.
"Look, everyone! We have guests!"
—Gomez
Advertisement:

The Addams Family is a pinball game designed by Pat Lawlor, illustrated by John Youssi, and released in 1992 by Williams Electronics (under the Bally label). It is based on the 1991 film of the same name, and Raúl Juliá and Anjelica Huston reprised their roles as Gomez and Morticia, respectively.

The game casts you as a visitor exploring the Addams' mansion, and the most obvious objective is survival. Not that it's easy, with the swamp and the graveyard out back, the electric chair in the parlor, the living bear carpet, secret passageways, and the Mamushka. While Gomez and Morticia try to be supportive, Thing is ready to lend a hand by helping you work the flippers. If you can get through all 13 rooms (game modes), you get to Tour The Mansion.

The Addams Family ultimately became the best-selling pinball game ever, breaking all previous sales recordsnote formerly held locks are by Bally's Eight Ball with 20,270 units sold. Bally eventually re-released it in 1994 as The Addams Family: Special Collector's Edition, with gold elements on the cabinets, more quotes in the game, and an expanded set of rules.

After a successful Kickstarter campaign, The Addams Family was added to The Pinball Arcade. The Collector's edition was given to those who donated a certain amount of money.note Unfortunately, after the licenses to the Williams and Bally tables expired on July 1, 2018, the table has been removed from sale.

"Look everyone, we have tropes!":