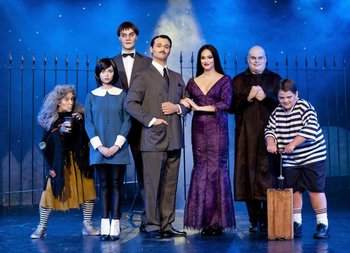 The Addams Family is a musical comedy with music and lyrics by Andrew Lippa and a book by Marshall Brickman and Rick Elice. The show is based upon The Addams Family characters created by Charles Addams in his single-panel gag cartoons, which depict a ghoulish American family with an affinity for all things macabre. It also features several new characters. Numerous film and television adaptations of Addams' cartoons exist, but the musical, which is the first stage show based on the characters, is officially based upon the cartoons rather than the television and film characters, though subtle references to the screen versions are made.

The plot revolves around Wednesday Addams, now a young woman, falling in love with a young man from a more conventional family and the culture clash that ensues.

After a tryout in Chicago, the show opened on Broadway in April 2010. The original cast featured Nathan Lane as Gomez and Bebe Neuwirth as Morticia. The musical was nominated for and won a number of awards, and has seen critical and commercial success in Broadway, US tour, and Sydney.