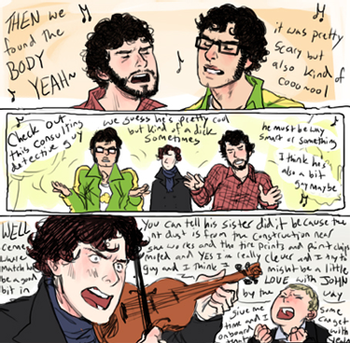 Bret and Jemaine teach Sherlock how to do musical exposition.
"Do you want some exposition?
Some information through a song?"
—Honest Trailers's alternative lyrics to "Do You Want To Build A Snowman" from Frozen
Advertisement:

Sometimes Exposition comes in subtle forms, like Flavour Text or Inner Monologue. Sometimes it's more a little direct, using an Opening Scroll or lengthy Infodump. And sometimes, Exposition comes with a full orchestra and choreography.

Musical Exposition is the use of a song to provide information important to the plot. It may take the form of a Crowd Song, or it may be sung by a single character. If the story has a Narrator, expect him or her to be involved in this musical number. Typically, this occurs near the beginning of a work, though it may also happen after a Time Skip or at the start of each act. Musical Exposition is particularly common in The Musical and in Animated Films.