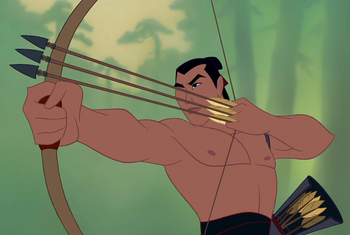 "Let's get down to business" indeed!
"Wrap your arms around the nearest pole, and fall for Li Shang—the handsome captain with the body of an Adonis ... He's a little Ping-curious, a little Mulan-furious, and very, very shirtless."
— Honest Trailers for Mulan