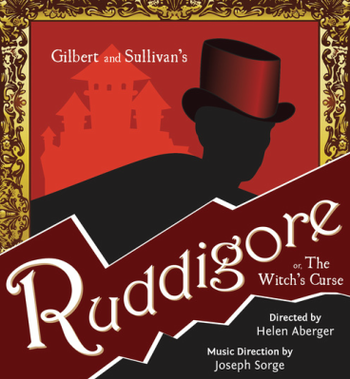 Each lord of Ruddigore,
Despite his best endeavour,
Shall do one crime, or more,
Once, every day, for ever!
This doom he can't defy,
However he may try,
For should he stay
His hand, that day
In torture he shall die!
— Dame Hannah, Act I
Advertisement:

Ruddigore, or The Witch's Curse, described by its author as "An Entirely Original Supernatural Opera in Two Acts," was the 10th of the "Savoy operas" produced by Gilbert and Sullivan. Ruddigore is a parody of the so-called "TranspontineLatin trans pontem, "across the bridge" melodramas" of the early 19th centurynote such as East Lynne, or The Earl's Daughter; Maria Marten, or The Murder in the The Red Barn; The Face At The Window; Sweeny Todd, or The Demon Barber of Fleet Street; and Crimes At The Dark House, which were performed at theatres south of the Thames — including their high-flown and archaic language, the extravagances of their plots, and their recurring Stock Characters: the innocent orphaned Village Maiden, the poor-but-honest Yeoman Hero, the sneering, snarling Bad Baronet, the Honest Sailor, the Good Old Servant, the Fallen Woman Driven Mad By A Dark Secret, and, of course, the Ghost — in this case, a whole Gallery of Ghosts.

An Animated Adaptation of the opera by British animation company Halas and Batchelor appeared in 1966. There have been three Live Action Television adaptations, in 1972, 1982, and 2005; the 1982 version featured Vincent Price as Sir Despard. Ruddigore is also the focus of the Phryne Fisher novel Ruddy Gore.

Tropes Associated With Ruddigore Include: