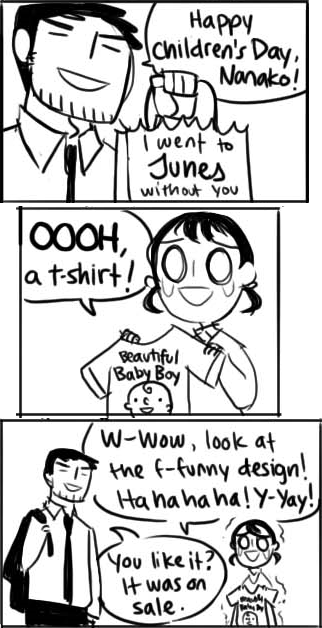 And he got his nephew a speedo.
Wise Men: O Baby Jesus, we bring you... a pack of cigarettes... a Diet Coke... and a sack of charcoal!
— Eddie Izzard, Glorious
Advertisement:

A gift which the giver has clearly put little time or thought into, and usually of little use/relevance to the recipient.

Alice is all ready for the office Christmas party and on the road when Bob calls to make sure she's on the way. "I sure had a hard time picking out a Secret Santa gift for Carol!" he mentions. Alice just then remembers that she drew Zachariah in the Secret Santa exchange, and never got around to buying anything. He just transferred into the department last month, Alice barely knows the guy. And it's 8 PM on December 24th, nothing's going to be open—what luck, there's a Gas-N-Go on the next exit! Now, present, present...store's nearly been picked clean! And Alice leaves the shop with a box of Cloud Cakes™ and a gift ribbon...

There are many gift-giving events throughout the year, some of which you can dodge, and others that you really shouldn't for reasons of family tranquility, office politics, or simple etiquette. But sometimes you just don't know a person you're giving a gift very well, or they're difficult to shop for, or you have no imagination, or you put it off until the very last minute. So you just grab the first thing that seems vaguely appropriate and give that. Some "white elephant" gifts have been making the rounds for years, being regiven over and over.

Gifts that fit this trope tend to fall into one of two categories:

Monetary gifts generally don't count for this as the recipient can easily use money, unless it's obviously a last-second resort (crumpled, sticky dollar bills, say.) Likewise, gift certificates or cards are usually not this unless it's restricted to a service or store the recipient isn't likely to use. ("A $20 gift certificate to the Bouncing Baby Boutique. How nice. Have I mentioned lately that I'm childfree?")

Often overlaps with My New Gift Is Lame. If the giver is especially confused they may give a Shoddy Knockoff Product as part of this trope. The recipient might say "You shouldn't have!" as a result. Contrast Crappy Homemade Gift. See also Gift-Giving Gaffe. Compare to Last Resort Takeout.

It's a Bargain Bin Christmas

Wanting to spend as little money as possible on gifts for the gala he's hosting, Scott gets several of the cheapest games he can find to give out to the guests.

It's a Bargain Bin Christmas

Wanting to spend as little money as possible on gifts for the gala he's hosting, Scott gets several of the cheapest games he can find to give out to the guests.