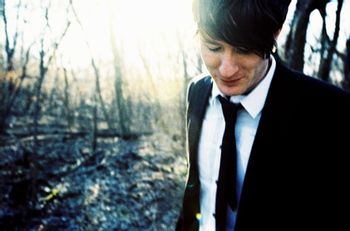 He'd like to make himself believe that planet Earth turns slowly.
Advertisement:

Owl City is an electropop project, and undoubtedly the most well-known among the several musical endeavors headed exclusively by singer/songwriter/multi-instrumentalist Adam Young (born July 5, 1986).

The project was originally created as a way for Young to deal with his insomnia; he would compose melodies in his head while at his job and then record them in a studio in his parents' basement. He gained a following uploading his songs on MySpace, and after his first independent releases saw impressive success, he was signed to Universal Republic Records (now just Republic Records). His subsequent release, Ocean Eyes, would make the project something of a household name, containing several hit songs, the most popular being "Fireflies," a sweet little song about his aforementioned insomnia and the loss of childhood innocence.

Owl City's sound is generally characterized by bubbly synths combined with oddball lyrics about cutesy romance, nostalgia, ethereal musings and puns. Lots of puns. Depending on who you ask, this combination of elements is either endearing or sickening. Nevertheless, Young has otherwise enjoyed a reasonably successful career, particularly with providing theme songs to several animated features, though he has yet to top his first big hit. To his credit, "Good Time", his collaboration with Carly Rae Jepsen, did come fairly close.

Aside from this, Young also has two other projects: the acoustic indie rock act Sky Sailing and a series of film-score-style instrumental albums inspired by historical events released under his own name.

How close to the ending? Well, nobody knows,
The future's a mystery and anything goes,
Love is confusing and life is hard,
You fight to survive 'cause you made it this far...
Feedback