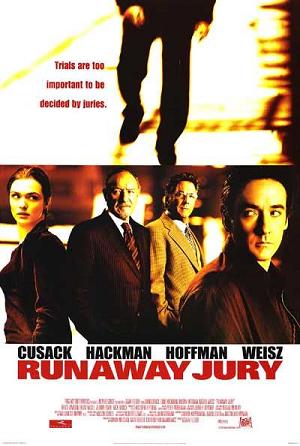 Fitch: You think your average juror is King Solomon? No! He's a roofer with a mortgage. He wants to go home and sit in his Barcalounger and let the cable TV wash over him. And this man doesn't give a single, solitary droplet of shit about truth, justice or your American way.
Rohr: They're people, Fitch.
Fitch: My point, exactly.
Advertisement:

A failed day trader in New Orleans, Louisiana shows up at his former workplace with a semiautomatic handgun and opens fire on the employees, killing several of them before turning the gun on himself. Two years later, Celeste Wood, the widow of one of the victims, claims that the gun manufacturer's negligence led to her husband's death and takes them to court, represented by lawyer Wendell Rohr (Hoffman).

Defending the gun manufacturer is attorney Durwood Cable (Bruce Davison), backed by jury consultant Rankin Fitch (Hackman) and his team of over a dozen employees, who set up an extensive surveillance system in the back of an abandoned costume shop to relay instructions to Cable in the courtroom. Fitch's team gather intelligence on the potential jurors for the case, including easy-going video game store clerk Nicholas Easter (Cusack). Fitch tries to manipulate the selection process to stack the jury with people likely to vote for the defense, but Easter baits the judge into putting him on the jury to give him a lesson in civic duty.

It soon becomes apparent that Easter and his girlfriend Marlee (Weisz) have a hidden agenda of their own, as Easter subtly manipulates the jury inside the courtroom (including getting them to vote Herman Grimes, a blind man with extensive knowledge of law, as foreman rather than Fitch's choice of inactive Marine Frank Herrera) and Marlee approaches both Fitch and Rohr with promises to deliver their desired verdicts for $10 million. Rohr decides he'd rather win the case on its merits, but Fitch is angered by the offer and fights back against the two grifters. The battle escalates as Easter's apartment is raided and Marlee is attacked by a hitman, while a key witness has a meltdown on the stand, threatening to scuttle Fitch's case. Just as deliberation begins, Fitch's researchers make a shocking discovery about who Easter and Marlee really are, and why they are so interested in the case.