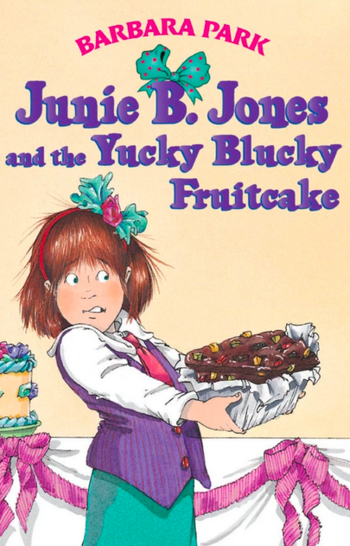 In America and (to a lesser extent) Britain, fruitcake is the common ridicule of many Christmas-time jokes for its bland taste and very long life, sometimes depicted as hard enough as to be indestructible, or to serve as a blunt weapon. It is often depicted as a gift given to someone the giver doesn't like, later used by the recipient as a doorstop, paperweight, or anything else a brick could be used for. Another joke surrounding it is the exact same fruitcake being passed around between "friends" or family members for decades, even centuries, because it's never gone bad (or perhaps can't get any worse than it already is), and no one wants to even taste it. Yet another joke is that fruitcake will be the only thing left After the End, apart from rats and cockroaches, and Even the Rats Won't Touch It.

The common stereotype came from the fact that fruitcake, when mass-produced and brought to the supermarket, has to be deliberately overbaked in order to have a very long shelf life, with side effects including hardness and a flat taste. Another reason people tend to dislike it is the unnatural colors, cloyingly-sweet flavors, and chewy textures of the fruit typically contained in these cakes (usually candied cherries, dyed green or an unnatural shade of red, and candied citron).

Even if people were to bake it themselves at home, the process is harder than they think; it is very easy to mess up the process, like baking it too dense or undercooking it so that the middle is a puddle of uncooked goo.

Very often subjected to Unconventional Food Usage, as people will use fruitcakes for just about everything besides eating.

So as noted, there is such a thing as a good fruitcake but it's rare to find one with a perfect balance of moisture and weight.note With the notable exception of British Christmas cake; the copious amount of alcohol in traditional recipes probably helps. By the way, despite the stereotype, it can go bad, so we would not recommend giving your kids a fruitcake that has been passed down for many generations — just chuck it in the bin.

A sub-trope to Stock "Yuck!", sometimes overlapped with Indestructible Edible.