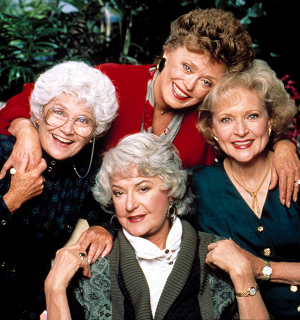 Clockwise from left: Sophia, Blanche, Rose, and Dorothy.
Dorothy: We have created a poetry-writing citrus farmer who writes letters with a lavender felt pen. And Rose thinks he's the most fascinating creature on Earth. Now what do you think that says?
Blanche: About Rose?
Dorothy: About the whole BUNCH of us!
— "Love, Rose", season 2, episode 10
Advertisement:

Picture it: Miami, 1985. Four women over fifty (although good luck getting Blanche to admit it) sharing a house and having misadventures in life and love. These women are:

The show ran on NBC for seven seasons (1985–1992), ranking in the Nielsen Top 10 for six of those seasons. After Bea Arthur (Dorothy) left, the three remaining women bought a hotel and continued on the CBS series Golden Palace, which ran for one unspectacular season. It also spun off the long-running sitcom, Empty Nest.

Like many sitcoms from The '80s and The '90s, The Golden Girls confronted numerous social issues, but with special attention paid to groups rarely covered by other programs, such as the elderly and the LGBT community. Throughout the years they covered topics as diverse as homelessness, AIDS, homosexuality, transvestism, prescription pill addiction, sexual harassment, interracial love, poor elderly care, and assisted suicide. Many episodes concerned the women's love lives, and all four women, whether divorced or widowed, were portrayed as sexually active.

Over seven years, The Golden Girls featured four hour-long clip shows and at least ten shows made up of multiple original flashbacks. These flashback episodes always centered on a theme, such as birthdays, moneymaking schemes, or bad dates.

Tropes with their own page

Thank you for being a friend!