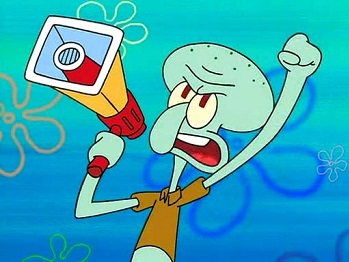 "We will dismantle oppression board by board! We'll saw the foundation of big business in half, even if it takes AN ETERNITY!"
For instance, I was teaching Sam peace chants for a long time, when he was only two. It was during the war in the Persian Gulf; I was a little angry.
"What do we want?" I'd call to Sam.
"Peace," he'd shout dutifully.
"And when do we want it?" I'd ask.
"Now!" he'd say, and I'd smile and toss him a fish.
— Anne Lamott, Bird by Bird
Advertisement:

What do we want?

A trope about us!

When do we want it?

Listen up, TV Tropes! I can't believe you guys forgot about me, the slogan-yelling megaphone guy, the most important part of any large public demonstration! How are people supposed to know what we're mad about? Wave signs around? That's lame! Noise is where it's at, the louder the better!

In fictional depictions, the audio quality is inversely proportional to how funny the scene is, so if it's a comedy, the guy standing next to me will always end up with busted eardrums since I'm answering his questions through the megaphone, but when I'm addressing the audience at large, expect a lot of— loud pitched squeals—and don't forget— no sound comes out for whatever reason! smacks the megaphone a few times

For extra attention, we can stand on a soapbox during our rally, so we're louder and taller!

Often leads to a Megaphone Gag.

Start listing some examples, folks! This trope isn't about to write itself, you know!