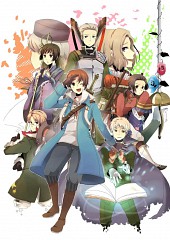 A Hetalia fangame found on Nico Nico Douga, currently in over 30 parts. America and Italy look for "The Atmosphere" in a library, when they meet a mysterious woman ( Actually Alternate Universe Ukraine) who gives them an equally mysterious book with five jewels on the cover. They are sucked into another world by it, and need to find their way back.

The videos are being translated and can be watched here