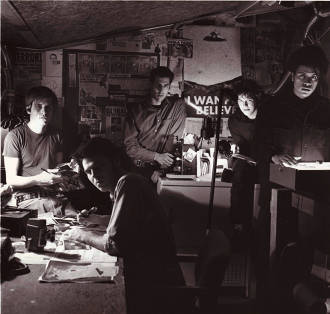 You can't see with the picture shrunk down this much, but the headlines on the wall behind them read: "Terror!" "Gov't Consiracy" "Evil Robots Will Makes Slaves of Us All!" "Did NASA Probe Find an Airplane on Mars?" and "Global Scorching".
Advertisement:

The Dingees are a Reggae/Punk Rock/Ska band from Long Beach, California. They were initially formed in 1996 as a side project of The OC Supertones (and traded band members with the 'Tones more than a few times), but soon grew into a distinct identity. Unlike nearly all of their 3rd wave ska contemporaries, they played Clash-inspired Genre Roulette rather than mix and match musical genres: their repertoire included punk songs, and reggae songs, and ska songs (but mostly punk songs), yet but precious little ska-punk or punk-reggae or what have you.

They recorded three albums in this varying manner for Tooth & Nail Records. Afterwards, they disappeared into the southern California underground music scene. In 2006, they put up a page on Myspace to let the outside world know that they still existed, and that they were working on a new album.

), and it was... different. Punk, ska, and reggae were still present, but this time they were mashed into a thick stew (with reggae predominating), and for the first time the Dingees added ragga jungle, hip-hop, sound collages, extensive sampling, and thoroughly grimy production to the mix.

The lyrics were the same as they always were: rallying cries for global unity and the overthrow of the establishment, songs of alienation from modern society, celebrations of street culture, and ruminations on God and the Biblical apocalypse.