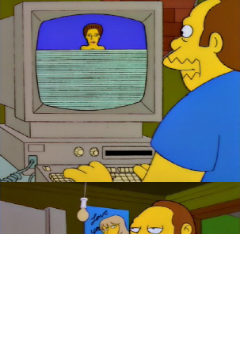 When someone is browsing the Internet for a date, or finally gets the picture of that sweet person they've been talking to in the chatbox. When the picture loads, it loads from the bottom up (instead of normal from the top down loading). You see beautiful long legs, nice clothes, long hair etc. The person looking at it will comment in excitement until they see the face and realize their dreamgirl turns out to be a lot less desirable. They are either ugly, a relative or someone they really hate.

Real slow-loading internet images tend to load from the top, although uncompressed Windows bitmap (.bmp) files will start loading from the bottom. Being uncompressed, they can be hundreds of times larger than an equivalent compressed image and, for some reason, are stored bottom-up (at least traditionally). However, BMP files are almost never used on the Internet (in fact, standards nowadays outright forbid the use of BMP files).

Can also apply to various other things. But the key is the Slow-Loading Internet Image promising something sweet but getting a twist when done loading. The loading can also occur horizontal, basically any way the show wants it to make the scene funny/exciting.

Something of a Discredited Trope in light of just how much Technology Marches On; most internet connections these days are more than capable of handling adequately-sized images. These days, if someone encounters one of these, it's most likely an issue on the server-side, though it theoretically could still happen to someone using a data connection that's being badly throttled. A more modern equivalent is slow or choppy video buffering, which is still very much an issue for most.