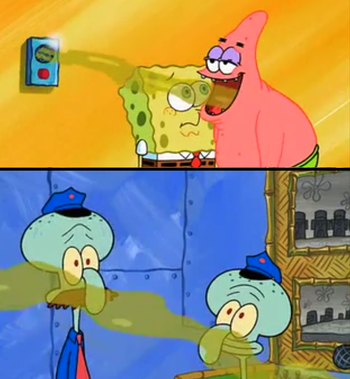 Should've thought to bring noseplugs with them.

Bad smells can be a rather unpleasant thing for the nose. Under the right circumstances, the smell can be pretty powerful; sometimes, so powerful that they can travel through communication devices. It won't matter even if you're either in an airtight bunker or miles away, because if you have any way to talk to someone via any communication device whatsoever, the smell can and will reach you.

A form of Up to Eleven and Beyond the Impossible. Sub-Trope of Reaching Between the Lines. See also Telephone Teleport.