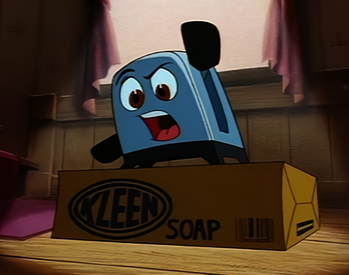 A character stands on top of an object, usually a chair, a stand, a literal soapbox, or some type of improvised platform to give a rousing speech, start a protest or just to air out their grievances.

Given how the speeches are usually done on impulse, improvisation is integral to the trope.

While soapboxing might have had dramatic flair in the past, it's often played for comedy nowadays.

A trademark tactic of the Soapbox Sadie and the Granola Girl. May also be utilized by a Slogan-Yelling Megaphone Guy for extra attention.