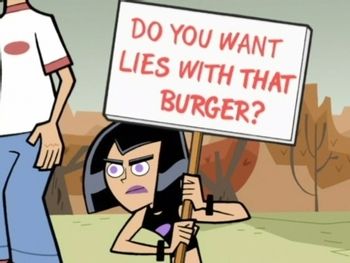 What exactly is she protesting? It doesn't really matter.
"Lisa, ordinarily I'd say you should stand up for what you believe in. But you've been doing that an awful lot lately..."
— Marge Simpson, The Simpsons, "Lisa vs. Malibu Stacy"
Advertisement:

A character, often a child or teenager and almost Always Female, who cares deeply about all worthy causes. She wants to protect the environment from polluters, prove that women aren't inferior to men, and Free the Frogs. If she's the main character of the show, she spends a lot of time struggling with her idealism and whether it is too unrealistic. Soap Box Sadie is usually a post-hippie, the type of girl who would have been a hippie had she not been born in the wrong decade. Sometimes she's updated to the new counter-cultures of the time like emos, goths, hipsters, the LGBT community, etc.

Around the turn of The New '10s, the terms "Social Justice Warrior" and "Woke" started being used for a type of Sadie concerned with issues of social equality and diversity (i.e. race, religion, gender, sexuality, disability, etc). This variant is more than likely a college-educated minority in at least one of those social classes. It generally refers to a type of progressive who advocates for social reform in a detrimental way: focusing on petty grievances, thinking anyone who doesn't 100% subscribe to their beliefs is The Enemy, and generally being more of a detriment to their cause than any help they provide. The term can also be used as an insult (and it usually is an insult when used online by an Internet Jerk), intended to get people to shut up even if the "social justice warrior" not only has a good point but isn't going about it the wrong way.

In most shows, Sadie exists to teach children about the importance of the environment, feminism, standing up for one's beliefs, and so on. Depending on the Sliding Scale of Idealism Versus Cynicism she's as likely to reach someone as she is to get backlash about forcing her beliefs on others.

Many of them are working for the greater good even if they are militant. However, some of them take their beliefs too far, or worse, don't even believe the stuff they're preaching.

See Former Teen Rebel for those who have outgrown this.