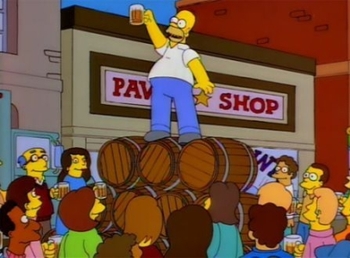 To alcohol! The cause of... and solution to... all of life's problems.
Advertisement:

"Homer vs. the Eighteenth Amendment" is the eighteenth episode of the eight season of The Simpsons. After Bart becomes intoxicated at the annual St. Patrick's Day parade, Springfield enforces a Prohibition-era law. As a result, Homer and his friends open a speakeasy while a no-nonsense Elliot Ness-style lawman sets out to stop them.

It's St. Patrick's Day and everybody in Springfield is hyped up to the point Bart is harassed for having forgotten to wear green to school and Moe bars designated drivers from patronizing his tavern. The day's main event is of course the downtown parade, with floats celebrating "200 years of Irish policemen" (who do not hesitate to club onlookers), the "drunken poets of Ireland" (who fight whoever they find) and a "small Irish family" (a woman scolds her drunken husband while their ten or so children run around). Meanwhile, drunken revelers harass Kent Brockman in his broadcasting booth and the crowd cheers when a British "chip shop" suddenly blows up.

Trying to get a better view, Bart decides to make his way through the crowd unaware that a Duff truck about is to spray beer on the expectant revelers and the whole thing ends up on Bart's long horn, inebriating him instantly. He is soon caught tipsily strolling along the parade, with the debauched celebration turning to outrage, with Brockman suggesting Prohibition as a measure. Homer scoffs at the idea, but the town's Moral Guardians, led by Helen Lovejoy and Maude Flanders, press Mayor Quimby to declare Springfield dry. The man at the registry then uncovers two 200-year-old laws: one about ducks having to wear long breeches, and another declaring alcohol prohibition in Springfield, which was apparently still in force. The news lead the town's boozehounds to pass out.

H.K. Duff VII, of Duff breweries, tries to comfort the public by announcing a non-alcoholic version of the popular beer, but goes out of business only a half-hour later. Meanwhile, Moe's is still operating as if nothing, also earning new clientele and the Mafia smuggles beer into town unpunished as the SPD is easily bribed, actually wondering why mobsters have a bad reputation. At night, Mrs. Lovejoy's entourage finds Chief Wiggum drunkenly dancing at the tavern and then forces Quimby to look for federal assistance (partly because the mayoral elections are incoming), with Treasury agent Rex Banner being selected to enforce prohibition, cleaning up the SPD and firing Wiggum on the spot.

As all accesses to Springfield are blocked out, Homer sees an opportunity to become a bootlegger by retrieving the town's buried beer supply, which he hides on bowling balls which are sent to Moe's via the Bowl-A-Rama. Marge soon finds out what Homer and Bart have been up to and... is actually supporting of their deeds, much to Lisa's chagrin, being sent to bed when complaining about breaching a law that might be unpopular, but it's still the law. Rumors arise about a "Beer Baron" baffling Banner, who vows to get him to justice and deems the very idea of a bootlegger operating under his jurisdiction to be laughable, even though he struggles to even make a slight chuckle.

As the beer supply runs out, Homer resorts to homebrewing liquor for Moe's Tav... er, Pet Shop. But this endeavor proves short-lived as the stills keep exploding and Marge asks him to stop. While Banner keeps on searching for the Baron, Homer finds a hungry Wiggum trying to hold him up... but his gun has no triggernote or handle, as he had to sell it to feed his family. Noticing his desperate situation, Homer offers to turn himself in so Wiggum could get his old job back... unaware that the punishment for violating the law of prohibition is being catapulted. When Marge protests such a form of punishment, Banner goes into a rant about why laws must be upheld, including the fact he'd kill everybody if it were not for the law. He then ends up flung by the catapult by "accident"... on Wiggum's orders. And just before Homer's execution takes place, the registry clerk finds out the 200-year-old prohibition law had actually been repealed for 199 years. Homer is then exonerated and vows to bring back booze at once, proclaiming it to be both the cause of and solution to all of life's problems.

"Homer vs. the Eighteenth Amendment" contains examples of: