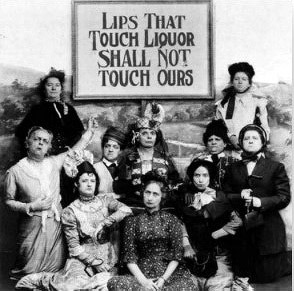 All the more reason to go off to the bar, then.
Advertisement:

During its long history, alcohol has caused (and "solved") a myriad of problems. There's no dispute that excessive consumption has caused damage to countless lives and society in general. Controlling its use has been a problem since the beginning of civilization. The solution of the Dry Crusader is one of complete prohibition.

The Dry Crusader is what you get when you cross The Teetotaler with the Moral Guardians, the Principles Zealot, and (sometimes) the Well-Intentioned Extremist tropes. It's a character who believes the consumption of alcohol is always evil in any amount at all times to everyone. Anyone who's unfortunate enough to be drinking a glass of beer within the Dry Crusader's line of sight will soon be subjected to an angry harangue warning him of the spiritual, moral, and health hazards that will result with one sip of the demon rum. It goes without saying that nothing short of a total ban on alcohol will satisfy the Dry Crusader. To achieve this goal, this person on occasion is not above resorting to any means necessary.

When the Dry Crusader appears, it's often in works that are set in the United States during the 19th and early 20th century which is the time the Women's Christian Temperance Union and the Anti-Saloon League were at their peak of influence, and which ultimately led to the Prohibition era, which lasted from 1920 to 1933 and saw the rise of organized crime to meet the demand. Instances of the Dry Crusader in stories set after the repeal of Prohibition in the U.S. in 1933 are far less common. You'll still come across characters who inveigh against all consumption of alcohol but, recognizing its historic total failure, they're less likely to advocate a complete ban or subjecting bars and taverns to hatchetization to achieve their goal.

Often the character will serve as a Strawman Political and usually be Played for Laughs. Expect your crusader to unknowingly imbibe alcohol at some point (sometimes an honest accident, sometimes for a prank, sometimes medicinally) and for them to get hilariously soused after one drink. This may break some of their pride and help them admit that they're only human, and to be a bit more understanding towards occasional indulgence. Or it could just make them angrier — tricking someone into imbibing a substance they have a moral revulsion to is generally not a nice thing.

As another Always Female character, the Dry Crusader is a Justified Trope. Alcoholism was a serious problem in the 19th and early 20th centuries, and usually it were the wives and children who had to endure the violent bouts of their alcoholic husbands, and the ensuing poverty as many men squandered their salaries on drink. The Dry Crusader is not limited to the U.S. and can also be found in stories set in Canada, Britain, and other countries that have a history of puritanism and/or campaigns against the consumption of alcohol, such as Scandinavia.

There's also another, darker side to the Dry Crusader, at least in the US. The US was industrializing at the time and factories were going up everywhere to take advantage of the nation's abundant natural resources. As a result, the economic boom was fed by a flood of immigrants, and where you get immigrants, you get a surge in anti-immigrant bigotry (this period also saw the formation of the anti-immigrant Know Nothing political party). Alcohol and alcoholism had always been a problem, but it was viewed as an individual moral problem, rather than a social problem, and much of the rise of the various temperance movements were fed by this rise in bigotry. Thus they wanted to fight the Germans with their beer, the Irish with their whiskey, the Italians with their wine, the Slavs with their vodka, etc. who were "destroying America's moral character with their degenerate habits". People at the time were well aware of this sort of thing, as the well-known slogan "Every Nation But Carrie" made it onto commemorative products sold by or to bars like postcards and miniature hatchets.note Carrie Nation was a nationally (in)famous temperance activist who attacked saloons with a hatchet. On the flip side, bars and saloons were happy to welcome any customer (outside the South) and came close to being the Melting Pot that the US likes to proclaim itself.

That said, this anti-immigrant bigotry is connected with the rise of the teetotaler movement to greater prominence, power, and radicalism in the late 19th and early 20th centuries. Temperance as a whole goes back well into the 18th century, where it could be connected with health (native American temperance movements), class (the poors and their gin), and, yes, the moral crusade against alcohol as a sinful vice. Hence, works which present a Dry Crusader may intend to present a very different message depending on the time period it was produced in and how they present the crusader. In 1790, theynote Yes, there were male teetotalers, although women were overrepresented because moral crusades were one of the few ways they could participate in politics might be presented as a little prudish, or a stuck up prig, or one of the few upright characters. In the 1890s, they might be presented as prudish, or a prig, or one of the few upright characters, or a white supremacist (which, again, might be presented as one of the few upright characters).

In many ways, the Smug Straight Edge is the descendant of the Dry Crusader in that both have a tendency to act self-righteously toward and condemn those who imbibe.

Compare to, and may cross over with, Heteronormative Crusader.