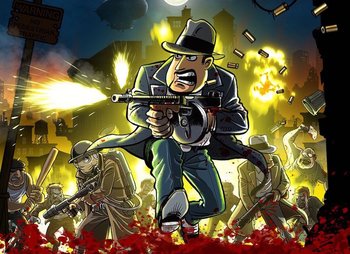 Guns, Gore & Cannoli is a 2015 Run-and-Gun game by Rogueside Games, based on the animated short film Hellbent For Whiskey

. Welcome to Thugtown, a Prohibition-era city run by the mafia and plagued with zombies. You control Vinnie Cannoli, a mob enforcer sent to find Frankie "The Fly," a small-time wise guy who went missing during the outbreak.

In March 2018 a sequel, Guns, Gore & Cannoli 2 was released. It takes place 15 years later in 1944 and features a temporarily-retired Vinnie getting caught up in a globe-spanning conspiracy involving more mafiosos, more zombies, and Those Wacky Nazis.

In June 2021 it was announced that Rogueside is working on a Warhammer 40,000-themed Spiritual Successor titled Shootas, Blood, & Teef. The reveal trailer can be seen here

The "Zombies VS. Wiseguys: Hellbent for Whiskey" cartoon includes examples of: