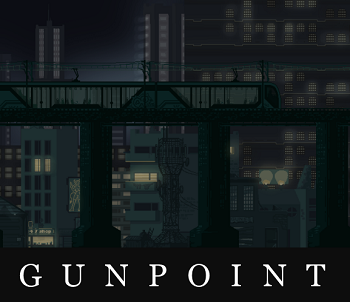 Gunpoint is "a game about rewiring things and punching people", as described by its creator, former PC games journalist Tom Francis.

Richard Conway, professional spy, hurls himself through his apartment window in a mishap with his new Bullfrog Projectile trousers. Watching from across the street is Selena Delgado, an employee for Rooke Firearms, who calls and offers him a job. Conway accepts, but is caught on camera on his way up to meet her; unfortunate, given that another agent murders Delgado shortly afterwards.

With footage placing him at the crime scene, Conway is certain to be arrested for the murder until Rooke, Selena's employer, calls Conway up. Rooke knows Conway didn't kill Selena, seeing as she was shot before the camera saw him, but she still has to hand the footage over to the police. However, if Conway were to erase all the backups...

So starts a winding tale of corporate espionage, intrigue, and a whole boatload of people getting punched in the face.

The game's featured tool is the Crosslink, a device which exploits Everything Is Online to let you rewire electrical systems in each level. Among other things, you can make light switches open doors, opening doors set off alarms, alarms toggle discharges from electrical outlets, and discharging electrical outlets summon the elevator to the floor with the noise-detector that will toggle the lightswitch.

On June 19, 2014, the built-in level editor was given the capability to upload levels to the Steam Workshop. In 2017, the creator released a Spiritual Successor called Heat Signature.