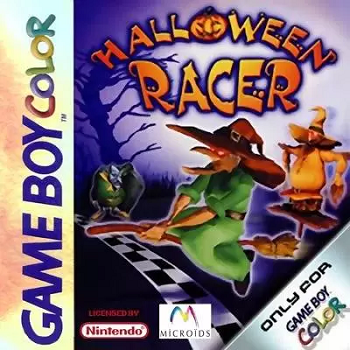 Smell you at the finish line!
Advertisement:

Released in Late 1999 for the Game Boy Color, Halloween Racer is a low-budget Mascot Racer developed by Visual Impact over a period of three to four months. The music was provided by Eden Sound and the publication was handled by Microids. The game was designed to be an impulse buy for Halloween and is appropriately themed. Hitting up two holidays at once, it also has Christmas-related elements and these only become available around the game's midway point. This also makes it a better fit for its Europe-exclusive releases, because Halloween as a spooky holiday is barely a thing there but Christmas is popular.

There isn't much meat to the story; just the denizens of Halloween organizing races in their realm. Six of these are playable: a witch on a broom, a knight on a floating shield, a scarecrow, a skeleton with fog feet, a penguin on a snowman's head, and a rabbit on a pumpkin head. These six cannot race against each other, but race against four, five, or six NPCs. The NPCs are much more simply designed than the playable cast and include a pumpkin person, a vampire bat, a mummy, a skeleton, a bedsheet ghost, a UFO, a carnivorous plant, a penguin, and a parka-wearing figure riding a snowball. The NPCs don't start at the finish with the player racer, but at various spots farther along the circuit.

The game offers two modes: Championship and Practice. Both are available in the difficulties Rookie, Advanced, and Expert. The latter two are unlocked by beating the lower difficulties in championship mode. Rookie covers four circuits (Vulcan, Egypt, Red Moon, Mine) and eight races, Advanced covers five circuits (Jungle added) and fifteen races, and Expert covers six circuits (Icefield added) and eighteen races. A bonus circuit, The Garden, is only available in practice mode after beating the expert championship. Championships are won by at minimum coming in third each race. Coming in fourth or failing to reach one of the circuit's checkpoints before the timer runs out requires the player to pay a credit to continue, which are earned by winning races and scoring points during races by picking up gems and overtaking opponents. The game makes use of a Password Save system in which passwords are handed out after each completed championship.

Halloween Racer received a Stealth Sequel in 2001 named Monster Racer. There is no marketing, title, platform, logo, or story to tie them together, but most of the cast of Halloween Racer and several circuits reappear.