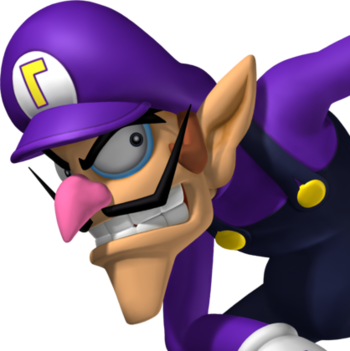 "They escape the crocodiles, and immediately stumble across the path of this lady. You can tell she's a bad guy because she's pointy. Only bad guys are pointy."
— Coded Lock Films in regards to Zira, Disney Direct DVDs:

A Sister Trope to Villainous Cheekbones and Sinister Schnoz. Like those two, this trope is about pointy facial features for villainous characters. While the Lantern Jaw of Justice is used to denote heroes, villains are more likely to have skinny, pointy chins. They may be short and skinny, or exaggeratedly long, extending past the face and maybe even curling upwards a little.

A pointy Beard of Evil can be used to similar effect. Bonus points if the two are combined.

This is mainly seen on Lean and Mean characters. It is usually seen on a Dastardly Whiplash, a Wicked Witch, or a Villainous Harlequin. It's also a frequent feature of Classical Movie Vampires and characters who Look Like Orlok, though neither Bela Lugosi's Dracula nor Max Schreck's Count Orlok possessed the feature themselves.note Lugosi had a broad chin bordering on being lantern jaw with slight but noticeable jowls, and Schreck's chin was round and somewhat underdeveloped, though it appeared slightly more pointed than it was in some shots due to being accented by his sharply angled Villainous Cheekbones.

Villainous chins usually are limited to male characters and elderly female characters, because of the higher demand for female characters to be conventionally aesthetically pleasing, whether good or evil. Nonetheless, if a villainess's chin is exceptionally lean compared to the other women, she still fits the trope.